Harper tells Knesset: Anti-Zionism is the new face of anti-Semitism 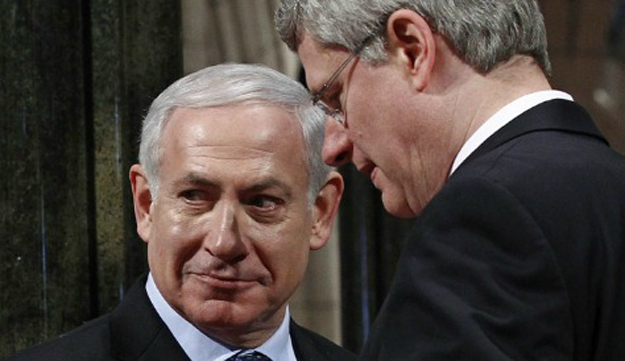 Canadian Prime Minister Stephen Harper on Monday became the first leader of his country to address the Knesset, telling parliamentarians that Canada supported Israel’s right to statehood and would not tolerate efforts to delegitimize it within the international community.

Speaking in both French and English, Canada’s national languages, Harper opened his address by telling members of Knesset that “Canada and Israel are friends in a natural way.”

“To truly understand the ties between Canada and Israel one must go beyond the institutions and look at the ties between peoples,” Harper said. “Jews have been present in Canada for more than 250 years… 350,000 Canadians share with you their heritage. They are immensely proud of what was accomplished here.”

“Canada supports Israel fundamentally because it is right to do so,” he added. “We stand up for a free and democratic Jewish state.”

Canada will not accept the delegitimization of Israel, Harper declared. “Canada finds it horrible that there are those in the international community who challenge Israel’s legitimate right to exist,” he said. “That with one solitary Jewish state among many others, it is all too easy to isolate Israel.”

The Canadian prime minister also told MKs that he believed expression of anti-Zionism to be on par with anti-Semitism. “Anti-Semitism still exists in its traditional form based on ignorance in some of the dark corners of the world,” he said. “In the Western world it takes on a more sophisticated form. With some intellectualized arguments on some campuses.This is the new face of anti-Semitism.”

Harper also turned his attention to the issue of Iran, which dominated headlines on Monday after the Islamic Republic began halting uranium enrichment and prompted the U.S. to suspend some its sanctions. “Canada’s sanctions against Iran will stay in place,” Harper vowed.

While Harper’s speech was welcomed by most parliamentarians, he was heckled by two Arab lawmakers: MK Ahmad Tibi screamed “settlements,” and MK Talab Abu Arar then shouted and stormed out of the hall. After the outburst, Harper received a standing ovation from other parliamentarians.

Harper arrived in Israel for his first visit on Sunday night, greeted with a royal welcome by Prime Minister Benjamin Netanyahu.

Netanyahu considers Harper his best, perhaps only, friend among today’s world leaders, and to be a wholehearted supporter of his government’s policy.

In introducing Harper to the Knesset, Netanyahu told his Canadian counterpart: “The people of Israel appreciate your steadfast support and sincere friendship. Welcome to Israel, dear friend.”

“There are those in the international community know the true facts, but you have the bravery to stick to the truth and to say the truth,” Netanyahu added. “Canada under your leadership is a moral compass and a lighthouse of honesty in the age of hypocrisy we live in.”

Throwing in some Canadian humor, Netanyahu told Harper: “There are streets in Toronto that are longer than the distance between Jerusalem and Ramallah,” referring to Yonge Street, which feeds into the TransCanada Highway. “This is why security is crucial.”

Netanyahu also praised Canada for standing with Israel against those who would delegitimize it, for backing it in the war on terror and against anti-Semitism, and for supporting a real peace with has “at its roots the Palestinian recognition of Israel as the Jewish national state.”

During a press conference with Palestinian President Mahmoud Abbas in Ramallah earlier on Monday, Harper dodged a question about the Israeli settlements. “I will not single out Israel on this trip,” he said. “Our position on this is known.”

This is Harper’s first visit since his election in 2006, and he is the first Canadian prime minister to ever address the Knesset. He will also receive an honorary degree from Tel Aviv University.

On the eve of Harper’s visit to Israel, the Foreign Ministry in Ottawa issued an updated policy paper on the Israeli-Palestinian conflict. Although many on the right believe the Harper government to be a full-fledged supporter of Israeli policy on the Palestinian issue, the policy paper states that Canada believes the settlements are illegal and an obstacle to peace.

The policy statement, published on January 13, six days before Harper’s arrival in Jerusalem, points out that Canada does not recognize permanent Israeli control over territories conquered in 1967 and says the settlements constitute a violation of UN Security Council resolutions. “Israeli settlements in the occupied territories are a violation of the Fourth Geneva Convention. The settlements also constitute a serious obstacle to achieving a comprehensive, just and lasting peace,” it reads.

The policy paper reveals that the Canadian government also does not support Israeli policy on Jerusalem, for Netanyahu’s demand for recognition of Israel as the national homeland of the Jewish people, nor Netanyahu’s position that not a single Palestinian refugee will return to Israel.

Canada’s stated support, however, for Israel touches on several issues – security arrangements, Israel’s right to self-defense, and opposition to anti-Israel discrimination at the UN.

The policy statement says that Canada recognizes Israel’s right to ensure its security: “Israel has a right under international law to take the necessary measures, in accordance with human rights and international humanitarian law, to protect the security of its citizens from attacks by terrorist groups.”

Harper tells Knesset: Anti-Zionism is the new face of anti-Semitism