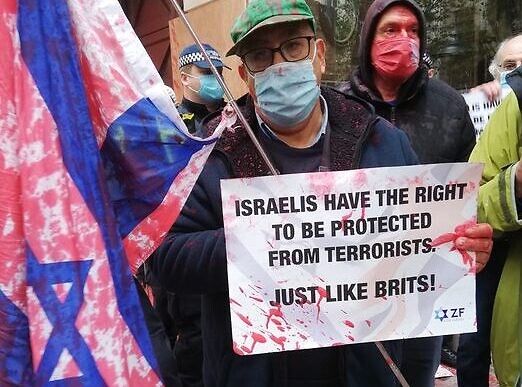 Five people were arrested and one police officer was injured at a London demonstration against an Israeli defence firm on Saturday.

Activists from Palestine Action sprayed red liquid on the headquarters of Elbit Systems in Holborn, a company which produces drones, missiles and artillery.

Pro-Israel activists who countered the demonstration were also covered in the substance, as shown in footage shared online.

In a statement, the Metropolitan Police said: “Officers were today, Saturday 10 October, policing a demonstration outside a business property in Kingsway, Holborn.”

Shortly before 14:00hrs a car pulled up by the demonstration and the occupants got out and sprayed a liquid onto the property.”

Five people were arrested either on suspicion of criminal damage or assault on police.”

One officer was injured in the arrest and is in hospital – not serious injuries.”

During footage posted on Facebook by Palestine Action, and by pro-Israel activist Jonathan Hoffman, anti-Israel activists are shown jumping out of a car to throw red liquid on the building, and counter-protestors.

Hoffman, pictured with his Israel flag daubed in the red substance, told Jewish News: “These anti-Israel activists showed their true colours: vandals who would deny Israelis the same right to be defended from terrorists as they themselves enjoy in London. That’s called ‘antisemitism’.” 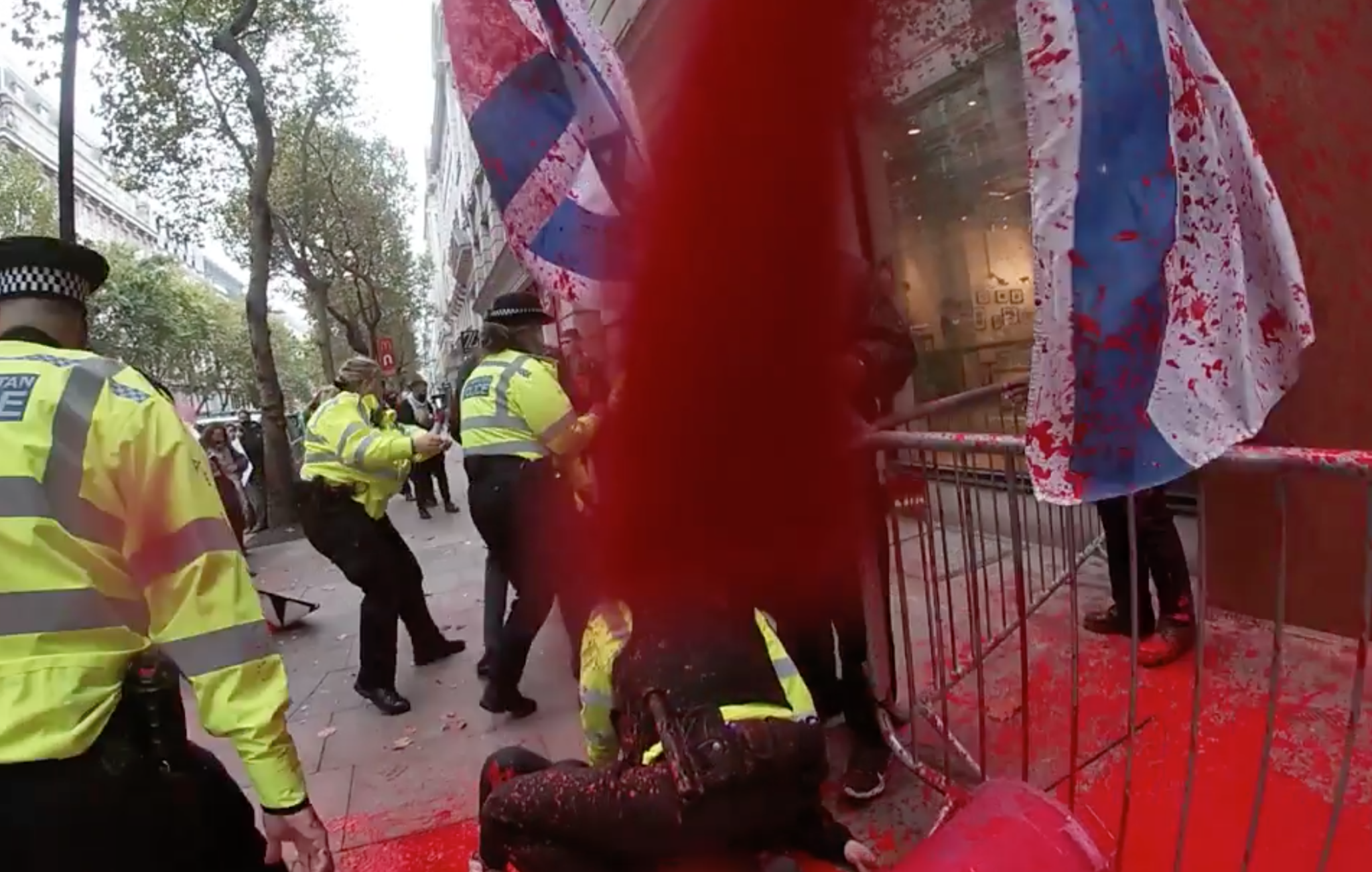 Police jump on demonstrators as they throw red paint on the building front of Elbit Systems, covering Israel activists in the substance in the process.

During footage anti-Zionist activists can be heard chanting “free Palestine” and “shut Elbit down”, as officers are shown arresting those who had sprayed red liquid against the building.

In a statement, Palestine Action accused Elbit of “manufacturing weapons used to commit war crimes around the world” which it says are”“battle-tested” in Gaza.

“The police have chosen to protect a company complicit in such war crimes and instead brutally arrest those standing up for human rights. We applaud the activists who put themselves on the line to take action against Elbit Systems and we will continue to spray paint for as long as they continue to spill blood. ”

The Zionist Federation UK Executive Director, Steve Winston, said: “Palestine Action activists showed their wholesale lack of regard for the law as they not only attacked public and private spaces, but so too did they attack the pro-Israel activists who were simply there exercising their right to protest peacefully.”

Accusing it of making “wildly malicious but unfounded claims” about Elbit,  the ZF added the firm works “closely with the UK’s Ministry of Defence, the Royal Air Force and Royal Navy” making technology which “quite literally, save the lives of thousands” of lives in the armed series. .

In 2019, HSBC clarified its decision to divest from Elbit Systems was due to production of cluster bombs and not boycott movement against Israel. Elbit rejected the explanation, saying it does not produce cluster bombs.

At the height of the pandemic, the defence firms began repurposing its manufacturing teams to build ventilators, as a global shortage forced Jerusalem to “build them ourselves”.

Five people arrested after a liquid was sprayed onto a building in Kingsway #WC2 just before 2pm. One officer injured.

Officers were already on scene policing a demonstration at the loccation.