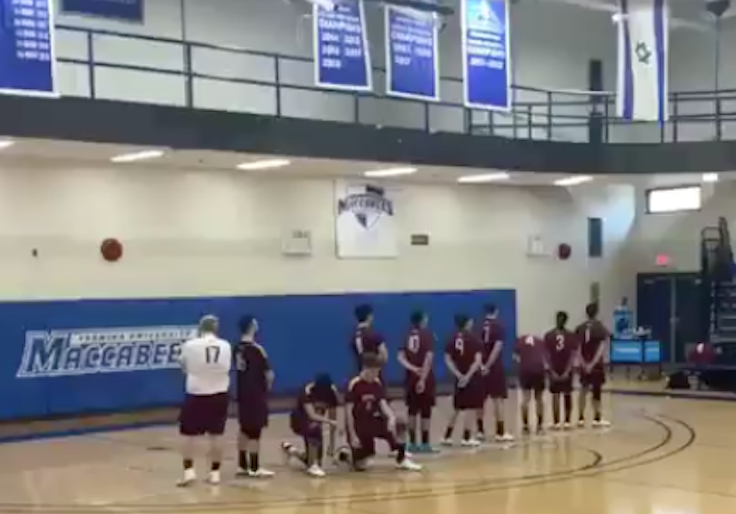 Student athletes at Brooklyn College are facing criticism after kneeling during the singing of Hatikvah, Israel’s national anthem, before a volleyball match against Jewish students of Yeshiva University.

At a men’s volleyball competition that took place during the weekend, two players from Brooklyn College can be seen on video taking a knee as Hatikvah plays. The kneeling Brooklyn players were subsequently identified as Omar Rezika and Hunnan Butt in social media posts on the event.

Post game, the same players refuse to shake the hands with the Yeshiva (i.e. Jewish) players.#Antisemitism at its finest! pic.twitter.com/9SoIoQNOJe

The episode is already making waves in the pro-Israel community after video of Rezika and Butt kneeling was posted on Twitter. The incident is just the latest in a long line of student athletes refusing to compete with, and even mistreating, their Jewish challengers. It has become commonplace in recent years for athletes to engage in anti-Israel political protests during sports competition. One of the more high-profile incidents occurred during the Rio Olympics in 2016, when Egyptian judoka fighter Islam El Shehaby refused to shake the hand of his Israeli competitor.

“It is unfortunate that some members of the opposing team disrespected Israel’s national anthem,” Berman said. “We are proud to be the only university who sings both the American and Israeli national anthems before every athletic competition and major event. Nothing makes me prouder to be an American than living in a country where our religious freedom, our Zionism and our commitment to our people will never be impeded and always be prized.”

While some alleged that Rezika and Butt refused to shake hands with the Jewish athletes, officials with both Brooklyn College and Yeshiva disputed that claim. They told the Free Beacon the players shook hands after the game ended, which is commonplace in volleyball matches. Video of the event posted online does not show whether the players shook hands.

A Brooklyn College spokesman, when reached by the Free Beacon for comment, defended the students’ rights under the First Amendment to kneel during Israel’s national anthem.

“Brooklyn College strongly condemns all forms of anti-Semitism and hatred,” the school official said. “The two students who knelt during the national anthem did not refuse to shake hands with players from the other team. Their kneeling is protected by the First Amendment.”

Yeshiva wrote on Twitter that claims a handshake did not take place are “not accurate.” It added “Please rest assured that if anything like that should ever occur we would handle it through the proper channels.”