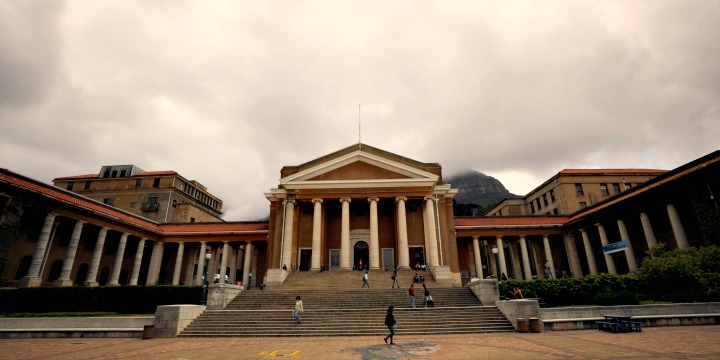 An American anti-Zionist academic who lost a tenured university position over his graphically-antisemitic outbursts on Twitter surfaced at the University of Cape Town (UCT) in South Africa on Wednesday, where he delivered a fierce attack on the “corporate university” and depicted Israel as the supine tool of an international “ruling class.”

Steven Salaita — whose inflammatory comments on social media during Israel’s Operation Protective Edge in Gaza in 2014 led to the University of Illinois-Urbana Champaign (UIUC) revoking a tenured job offer it had made to him — delivered the 2019 T.B. Davie Memorial Academic Freedom lecture on what he called “the inhumanity of academic freedom.”

Deploying a mixture of simplified Marxist economics with progressive identity politics, Salaita told the audience in Cape Town that academic freedom meant little in an “economy structured around obedience.”

Assailing the concept of “academic freedom” as a ruse that distracted from the cause of genuine social freedom, Salaita insisted that Israel was a major beneficiary of the “structural forces, often unseen, always beneficial to an elite” who “determine what gets heard,” according to a summary of his remarks tweeted by the Palestine Solidarity Forum at UCT.

“Why does Israel, such a small country, enjoy such prominence on campuses?” Salaita asked. “Because Israel humors the ruling class.”

Salaita praised South Africa as the “global moral leader in the Palestinian people’s struggle.” He also expressed strong support for the campaign at UCT for an academic boycott of Israel, arguing creatively that “when the UCT Senate passed a motion against Israeli universities violating human rights, there was a flurry of discontent. Most of them cited academic freedom, and exercised their power to shut down the motion.”

Therefore, opponents of an academic boycott of Israel “themselves, in so doing, violate academic freedom,” Salaita claimed.

By the standards of Salaita’s previous outpourings, Wednesday’s lecture in South Africa was comparatively restrained. In his 2014 tweets — posted when he was a professor of English at Virginia Tech — Salaita displayed a disturbing affinity for terrorist violence, declaring, “You may be too refined to say it, but I’m not: I wish all the f***ing West Bank settlers would go missing,” after Hamas operatives kidnapped three Jewish teenagers from a Gush Etzion hitchhiking post and murdered them.

Other hyperbolic tweets from Salaita included the claim that there was a “sexual…Zionist pleasure w/ #Israel’s aggression,” and that Zionism had transformed antisemitism from “something horrible into something honorable since 1948,” the year of Israel’s creation.

Salaita’s presence in South Africa this week did not pass without criticism. In an article for local website PoliticsWeb published on Monday, South African scholar David Benatar questioned whether the invitation to Salaita would have been extended had his slurs against Jews been aimed at another minority group.

“Consider the case of an American academic whose tweets include the following,” Prof. Benatar wrote. “‘You may be too refined to say it, but I’m not: I wish all the f***ing Mexicans would go missing…’ ‘African nationalists in South Africa: transforming racism from something horrible into something honorable since 1994.’”

Wrote Benatar: “The UCT Academic Freedom Committee; has invited Dr Steven Salaita to deliver the 2019 Academic Freedom lecture named in memory of Dr Thomas Benjamin Davie, former UCT Principal who fought the imposition of Apartheid on UCT in the 1950s…[whatever he says] no matter how vile, he has a right to say it and I would oppose any call for him to be disinvited, heckled, or otherwise silenced.”

Benatar added that he was “not aware of any such calls.” Still, he continued, it did not follow that Salaita “was a fitting invitee to deliver an academic freedom lecture in memory of Dr Davie, or that anybody should go listen to him.”

A separate online petition addressed to UCT urged the university authorities to organize “alternative programming to ensure that opposing views are heard. Salaita’s lecture can be used as a teachable moment to educate the community about the consequences of following his advice.”

The petition, which gathered over 60,000 signatures, noted: “It is particularly critical to do so because Cape Town is presently considering a proposal to support an academic boycott of Israeli universities. It would be unwise and unprofessional to make that decision without a full airing of competing views.”

Written by Prof. Cary Nelson — a former head of the American Association of University Professors (AAUP) — the petition also underlined that Salaita’s anti-Zionism had “led him to cross a particularly dangerous line into anti-Semitism: he urged that Zionists be cast out of progressive organizations and campaigns. The effect on a campus or community would be abhorrent.”

Nelson asserted that there was “more than one painful irony at stake in selecting Salaita as a spokesperson for academic freedom.”

Salaita’s “long term support for an academic boycott of Israeli universities puts him in conflict with the fundamental values that define the academy, foremost among those being the principle that faculty members worldwide be free to communicate their research and analysis with one another without restraint or inhibition,” Nelson wrote.

Jewish organizations in South Africa also leveled criticism at UCT for its invitation to Salaita.

In a statement emailed to The Algemeiner, the head of the South African Zionist Federation charged that UCT’s Academic Freedom Committee — which hosts the annual lecture — had “now simply become a vehicle to steamroll a boycott of Israeli academia at the expense of UCT’s reputation and international standing.”

The committee had “weaponized the concept of academic freedom in order to bash the one and only Jewish State,” the federation’s national chairman, Rowan Polovin, wrote.

“We call on the University of Cape Town to disband the current committee and demonstrate its commitment to academic freedom at the University,” Polovin concluded.

After the University of Illinois-Urbana Champaign (UIUC) rescinded the tenured job offer made to him in 2014, Salaita was subsequently hired by the American University of Beirut in Lebanon. That institution decided not to renew his contract after he taught there for one academic year.