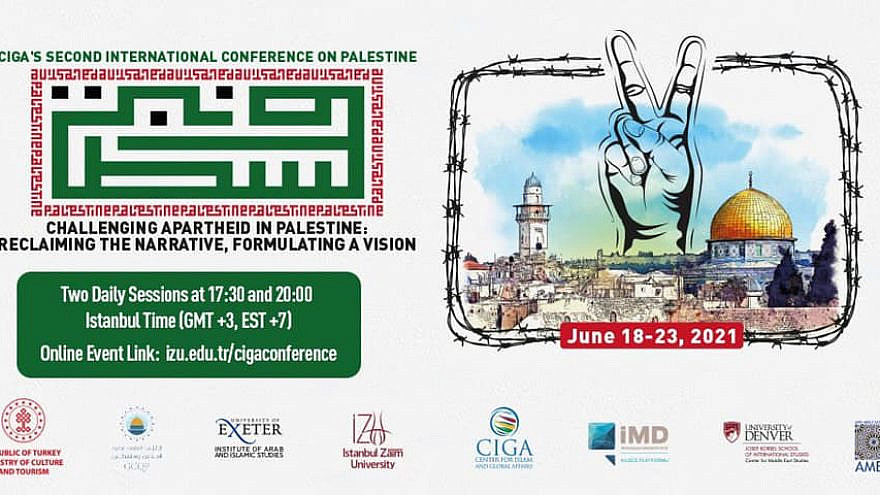 Israel continues to draw the ire of hateful detractors who wish to see what they perceive as the “apartheid Jewish Zionist colonial state” replaced in full by a state called Palestine.

The Center for Islam & Global Affairs (CIGA) in Turkey hosted its second international conference on Palestine from June 18-23, sponsored in part by the Muslim Brotherhood-affiliated Turkish umbrella group the Global Coalition for Quds and Palestine. The program was replete with Palestinian propaganda, revisionist history, and blatant anti-Semitism and anti-Israel vitriol.

The conference, which features online sessions with professors and anti-Israel activists from around the world, was initiated by Sami Al-Arian, who pled guilty in 2006 to providing services and assistance to the U.S.-designated terror group Palestinian Islamic Jihad (PIJ). The U.S. Justice Department sentenced Al-Arian to prison time and deportation, after which Al-Arian established CIGA, a center that he uses to promote his anti-Israel agenda.

What has concerned the pro-Israel community is that a number of the panelists at the conference are professors at publicly funded American schools. The University of Denver’s Josef Korbel School for International Studies, for example, is a co-sponsor; its logo features prominently on the advertisement.

“In light of the disturbing connections between some of the slated speakers and anti-Israel terrorist organizations,” she said, “the university must immediately condemn terror violence, and hopefully, reconsider its co-sponsorship of this deeply offensive program.”

A JNS inquiry to the Korbel School received no response by the time of publication.

Called for the destruction of Israel

In his address to one of the numerous panels, Al-Arian slammed Israel, telling the conference “there is no doubt we are talking about a settler, colonialist movement. What we see here today is an attempt to depopulate the indigenous people, and bring in as many Jews from around the world and try to bring a system that is properly being identified now as apartheid. There is no doubt about this.”

He called Israel a “racist movement” that works in a “Zionist onslaught” to replace the “indigenous people,” and called for the destruction of Israel, saying “the essence of the struggle should be to dismantle this structure,” i.e., meaning Israel.

Eleven American professors were initially slated to participate in the conference as speakers—nine from public universities. Among them were Joseph Massad from Columbia University and Lubna Qutami, assistant professor at the University of California, Los Angeles. Qutami is also a founder of the terror-supporting group Palestinian Youth Movement (PYM).

San Francisco State University professor Rabab Abdulhadi, who sought to invite terrorist and airplane hijacker Leila Khaled to give a lecture to her students and was blocked by Zoom, YouTube and Facebook, attempted to discredit the right-wing pro-Israel lobby, and went on to name every existing organization and individual.

Huwaida Arraf from the National Lawyers Guild, USA, accused Israel of committing crimes of apartheid and genocide, and of acting as a “colonial regime.”

Ahlam Muhtaseb of California State University, San Bernardino, accused Israel of “ethnic expulsion of Palestinians from their homes” and stated that Palestinian activists are “reclaiming the narrative and outsmarting the colonial, imperial powers behind social media.”

Despite the fact that the conference was hosted by a convicted supporter of a jihadist terror group and sponsored by a group that has strong affiliation to the Muslim Brotherhood, multiple representatives of NGOs participated as speakers, including Omar Shakir, Israel and Palestine director at Human Rights Watch. In 2016, Shakir was expelled from Israel for promoting the anti-Israel BDS boycott movement.

Estee Chandler, a member of the anti-Israel group Jewish Voice for Peace, accused Israel of “entrenched occupation and siege” and of “crimes against humanity, apartheid and persecution.”

‘Messaging and materials find their way into the classroom’

She also said that in the wake of Israel’s recent conflict against Hamas in Gaza, “more than 150 U.S. academic departments have issued blatantly anti-Zionist statements that embrace the demonization and destruction of Israel, framing these as part of their department’s core mission.”

She added that during this same period, “student reports of anti-Semitic bullying, harassment and genocidal threats are through the roof, and we know this is no coincidence. There is a direct correlation between faculty endorsements like this and incidents of anti-Jewish violence on campus.”

Elman noted how people often wonder how radical anti-Israel and anti-Zionist propaganda reaches students on U.S. college campuses, pointing out that “conferences like this, made all the easier to host via online platforms, provide one answer. Faculty who attend and present at these events are the conduits. They often bring back messaging and materials that find their way into the classroom.”

She added that while faculty “should have the freedom to decide what conferences they will attend and speak for, one would hope that they will make wise choices and decline invitations that involve appearing alongside officials of U.S.-designated terror organizations or on the program line-up with radical organizations that have documented ties to such groups.”

Rossman-Benjamin insisted that university administrators “have a responsibility to ensure that students—Jewish students, pro-Israel students and all students—are equally and adequately protected from harassment and harm. They must put safeguards in place, immediately, to prevent such politicization of disciplines and guarantee that Jewish and pro-Israel students will be protected from the inevitable anti-Semitic fallout.”

Chancellor of the University of Denver Jeremy Haefner writes in response:

Let me say unequivocally that neither the university nor the Korbel School authorized any sponsorship of the conference in question on the Middle East, nor in fact, knew anything about it. What you may have seen on the website was the logo of the Center on Middle East Studies that acted individually, with no knowledge of or approval from us. This will not happen again. While of course, we respect academic freedom, the action was not authorized, no funding was involved, and it reflects neither the point of view of the school or the university, nor that of our leadership. We are committed to assuring that the experience of our Jewish students, faculty and staff is supportive, safe, respectful, welcoming and warm, just as I am committed to assuring the safety of every member of our campus. We do not condone anti-Semitism, violence or terrorism In any form. I do not take these allegations lightly, nor will I tolerate any such behavior on our campus.