American Muslims for Palestine director: ‘Israel is a parasite that sucks the blood of America’

Touting increased support for “Palestine” in the United States and especially among the Democratic base, Osama Abuirshaid says accusations of anti-Semitism ”are no longer influential.” 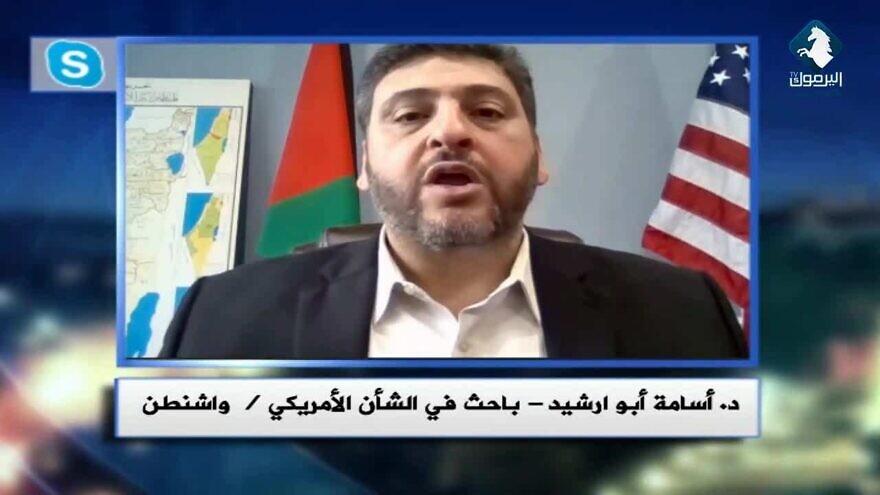 The executive director of American Muslims for Palestine said in an interview last week that Israel is a parasite that sucks America’s blood, and that accusations of anti-Semitism “are no longer influential.”

Speaking with Jordan’s Yarmouk TV on Sept. 22 about the recent removal of funding for Israel’s Iron Dome air defense system from U.S. budget legislation, Osama Abuirshaid said, “We are witnessing the closing of the ranks, and an emphasis on the force that supports Palestine within the Democratic Party.”

“Their concept of support obviously differs from the Arab, or Eastern, notions here [in Jordan]. It is not that they want to go back to the source of the problem and view Palestine from the [Jordan] river to the [Mediterranean] sea as occupied land, but they believe that the Palestinians deserve to live,” he said.

“Israel has become a partisan issue. There is no longer a political consensus about Israel. Criticizing Israel is no longer tantamount to political suicide,” said Abuirshaid.

The Jewish state, he said, “is a case of a parasite living off the American body. America is going through an economic crisis. America is suffering strategically. It is suffering in many places in the world. It is withdrawing from many places in the world—from Afghanistan, from the Middle East, from other places, because it wants to focus its energies on the rising Chinese dragon. Nevertheless, Israel pulls America back. It sucks the blood of America, and scatters its attention.”

Abuirshaid acknowledged that his words would draw accusations of anti-Semitism, but said that such accusations no longer mattered.

‘These are facts. What I am saying is considered to be anti-Semitic, and I will be accused of [anti-Semitism], but these accusations are no longer influential, because they are illogical. There is no electricity or clean water in some American cities, but we do have $1 billion to give to Israel—on top of the $3.8 billion we give Israel every year—so that it can develop the so-called Iron Dome and continue killing the Palestinian people with American missiles,” he said.

Abuirshaid predicted that support for Israel would continue to decline in the United States, saying, “The more Americans know about Israel the less they like it.”

American Muslims for Palestine director: ‘Israel is a parasite that sucks the blood of America’

Touting increased support for “Palestine” in the United States and especially among the Democratic base, Osama Abuirshaid says accusations of anti-Semitism ”are no longer influential.”