You have to hand it to the Presbyterian Church USA. Its leaders can’t figure out how to recruit new members or stop churches from leaving the denomination in droves, but they sure do know how to run a propaganda war against Israel and its Jewish supporters in the United States. Like the Palestinians for whom the church advocates so irresponsibly, officials and activists in the PCUSA are more intent on attacking Israel and its supporters in the United States than promoting the welfare of the community they lead. 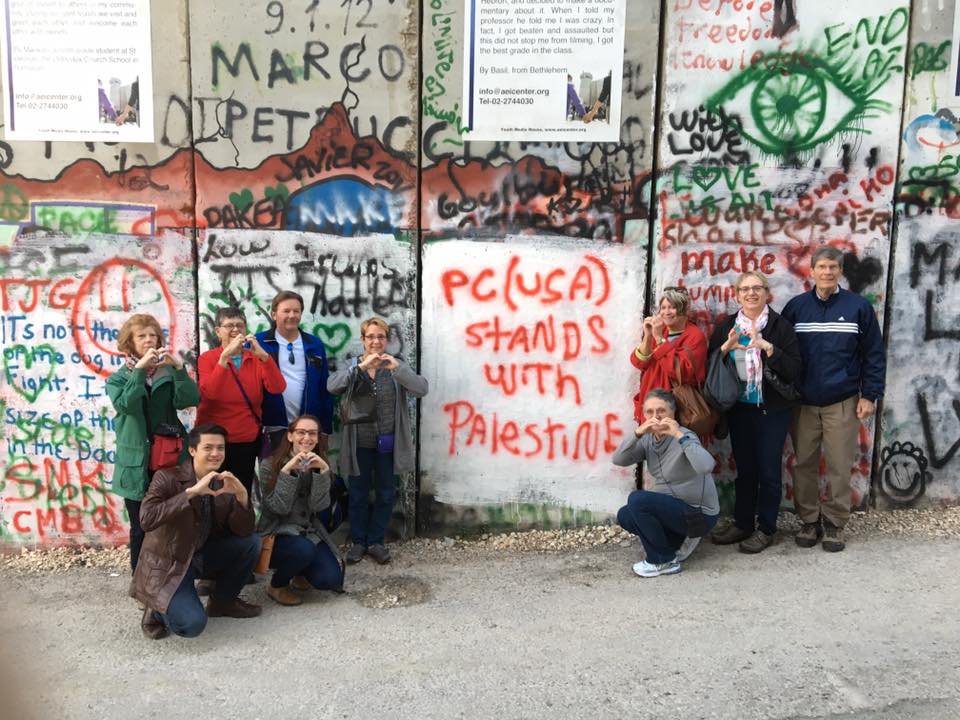 Members of the Presbyterian Church USA’s Israel Palestine Mission Network pose in front of Israel’s security barrier during one of their trips to the Holy Land. The graffiti on the barrier readers “PC (USA) stands with Palestine.” Credit: Twitter.

About the best that can be said for the denomination is that it is not losing as many members as it used to. That was the underlying message of a press release written last March by Jerry Van Marter, interim communications director in the PCUSA’s Office of the General Assembly. In a piece about the church’s ongoing collapse, Van Marter’s headline declared that “PC(USA) membership decline continues but slows.”

The delegates who attend the PCUSA’s General Assembly, which will take place in St. Louis in June 2018, may spend some time talking about this decline and what to do about it, but a lot of their time and energy will be directed at promoting anti-Israel propaganda to the church’s declining membership.

One overture already on the agenda directs the General Assembly to affirm the right “to criticize practices and policies of Israel, as we do any other global political entity, without fear of being labeled anti-Semitic.” The same resolution calls on the church to articulate its “faith with confidence, humility, and integrity, and anticipate respect for our own faith convictions, as we also would respect others.”

This resolution is pretty rich coming from a church whose peace activists have regularly trafficked in anti-Jewish propaganda over the years, while remaining virtually silent about the ongoing murder and oppression of Christians in Muslim-majority countries throughout the world. The fact is, the “global entity” that the denomination regularly condemns is Israel. Jihad is a global reality, but good luck finding any direct reference to it on the PCUSA’s website. And as far as “respect,” were PCUSA “peace” activists being respectful when they posted an image of President Barack Obama wearing “Star of David” earrings a few years ago?

Another resolution on the PCUSA’s agenda calls for the church to affirm a letter written by Palestinian Christian leaders that, among other things, declares that the Balfour Declaration was “unjust and unlawful,” accusing Israel of apartheid and describing the Jewish state as a “colonial state.” Arguments like this affirm Palestinian rejectionism and promote more Palestinian violence against Israel.

As outrageous as the resolutions that are already on the agenda are, they are not going to be the main show. They will surely generate criticism and anger from American Jews who have grown tired of Presbyterian Jew-baiting, though such resolutions are merely put forth as smoke and camouflage to distract observers from a pro-BDS (Boycott, Divestment and Sanctions)  resolution that will likely be put forward sometime between now and June. Currently, there is an overture on the agenda that opposes legislative efforts to ban anti-Israel boycotts, but observers fully expect to see a more explicit attempt on the part of Presbyterian activists to push the BDS agenda forward.

An explicitly pro-BDS overture has yet to be posted on the denomination’s website, but one is almost surely in the offing, and if it passes, anti-Israel activists will claim a victory against the evil of Zionism.

The intention of the activists and staffers in the PCUSA is to distract and enrage Israel’s supporters with an opening salvo of shameful resolutions in the hopes of sneaking a pro-BDS resolution past a distracted and exhausted community of pro-Israel activists. It is all part of a sophisticated and intentional strategy of Jew-baiting that the denomination’s peace activists and leaders have been perfecting for more than a decade—while their church dies.

Dexter Van Zile is a Christian media analyst for the Committee for Accuracy in Middle East Reporting in America (CAMERA).