Antisemitism in the US: Why all Americans should be gravely concerned 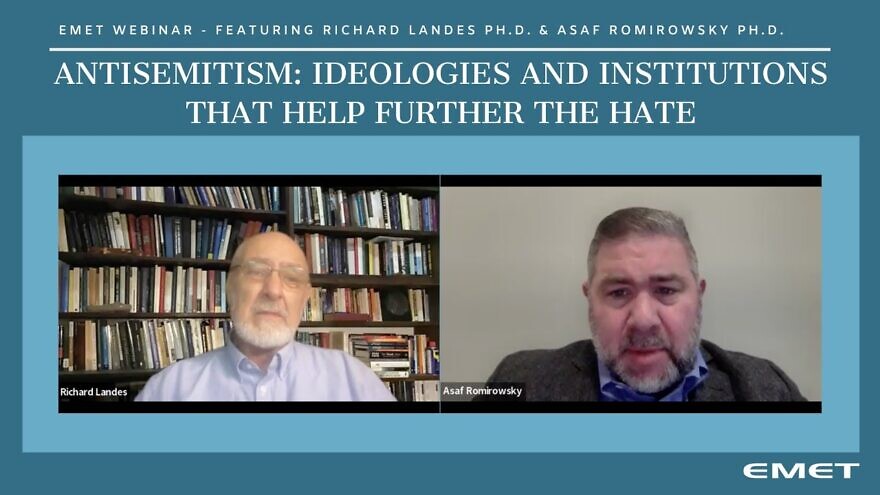 From the halls of Congress and college campuses to corporate board rooms and social and mainstream media, antisemitism from the left, right, the Black community and the Islamic community is metastasizing with no end in sight. On the heels of the publication of historian Richard Landes’ new book, Can The Whole World Be Wrong?: Lethal Journalism, Antisemitism, and Global Jihad (Antisemitism in America), Landes and Scholars for Peace in the Middle East Executive Director, Asaf Romirowsky, join us for a discussion of antisemitism in America today, why all Americans should be gravely concerned, and what we should be doing to fight this dangerous hatred.

Richard Landes Ph.D. Richard Landes was a professor of history at Boston University and is now an independent scholar in Jerusalem. He also chairs the Council of Scholars at SPME. His work focuses on apocalyptic and millennial beliefs at the turn of the first and second millennium, 1000 and 2000 CE. He coined the term Pallywood in 2003 while investigating the Muhammad al Durah affair and maintains a blog critical of western journalism, The Augean Stables. His latest book is: Can “The Whole World” Be Wrong? Lethal Journalism, Antisemitism, and Global Jihad (Academic Studies Press, 2022). He tweets at @richard_landes.

Asaf Romirowsky Ph.D. is the Executive Director of Scholars for Peace in the Middle East (SPME) and the Association for the Study of the Middle East and Africa (ASMEA). Romirowsky is also a senior nonresident research fellow at the Begin-Sadat Center for Strategic Studies (BESA) and a Professor [Affiliate] at the University of Haifa. Trained as a Middle East historian he holds a Ph.D. in Middle East and Mediterranean Studies from King’s College London, UK, and has published widely on various aspects of the Arab-Israeli conflict and American foreign policy in the Middle East, as well as on Israeli and Zionist history.

Romirowsky is co-author of Religion, Politics, and the Origins of Palestine Refugee Relief and a contributor to The Case Against Academic Boycotts of Israel. Recently, he co-edited Word Crimes: Reclaiming the Language of the Israeli-Palestinian Conflict, a special issue of the journal Israel Studies.

Romirowsky’s publicly-engaged scholarship has been featured in The Wall Street Journal, The National Interest, The American Interest, The New Republic, The Times of Israel, Jerusalem Post, Ynet, and Tablet among other online and print media outlets.

Antisemitism in the US: Why all Americans should be gravely concerned